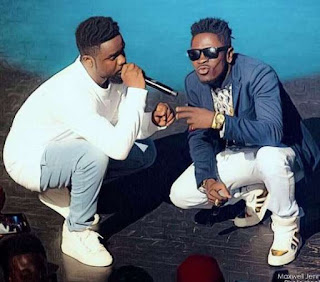 By now every ardent follower of Ghana music has come to realisation that Shatta Wale rides on unnecessary controversies to keep his name going. So, it’s not surprising that Shatta has been throwing shade at Sarkodie and Stonebwoy off late whenever he gets media platform.
It could be recalled that Shatta Wale in recent times has disrespected Sarkodie in so many ways by describing him with uncouth words. For clarity sake, Shatta lambasted Sarkodie for composing a song titled “Black Excellence” to put our wicked politicians on track.
Besides, the self-acclaimed Dancehall king didn’t hesitate to throw series of shades at Sarkodie when he was recently interviewed on Hitz FM. But from what we’ve gathered, Sarkodie is not happy taking into consideration Shatta’s utterances whenever he’s interacting with the media.
Well, you know Sarkodie is matured enough so instead of jumping from one radio station to another to cast slur at his colleagues like how Shatta Wale is doing, he communicates his emotions via rap music. Now, we’ve come across a viral snippet of a yet-to-be released song by Sarkodie and per the lyrical content, the SarkCess Music CEO composed the song with cantankerous Shatta Wale in mind.
This is because Sarkodie clearly mentioned in the song that Shatta Wale keeps saying that he (Sarkodie) doesn’t listen to his (Shatta) advice. But according to Sarkodie, his colleague is just making too much noise because he’s not a kid.

“…. Shatta Wale se sɛ ɔtu me fo a menfa, mahunu atra….”, to wit; Shattta Wale says I don’t listen to his advice, but I already know.. “, that’s an excerpt of Sarkodie’s yet-to-be released diss song to Shatta.
However, the title of the song remains anonymous but the outcome won’t be that different from his “Kanta” (M.anifest) diss song in 2016. Enough,