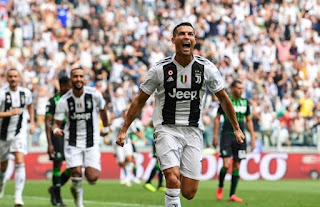 Portuguese star Cristiano Ronaldo scored his first competitive goal for Italian champions Juventus and then added a second in Sunday’s fourth Serie A game of the season, against Sassuolo in Turin.
The 33-year-old tapped in on the line after a goalmouth scramble on 50 minutes, and added a second 15 minutes later to give the reigning seven-time champions a 2-0 lead.
The five-time Ballon d’Or winner was the star signing of the summer transfer period, arriving amid great pomp and ceremony following a 100 million euro ($117 million) deal from Real Madrid.

There has been no response to " Watch Video: Cristiano Ronaldo scores two goal for Juventus against Sassuolo"