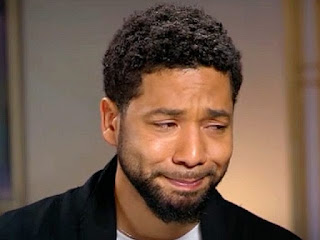 Embattled Empire star, Jussie Smollett has been hit with an additional 15 counts of filing a false police report by a grand jury and is now facing up to 48 years in prison
Smollett who is accused of hiring Nigerian brothers Abel and Ola Osundairo for $3500 to beat him up in January, in what he later described to police as a racist and homophobic attack.
He was initially charged with one Class 4 Felony charge of disorderly conduct last month but now a grand jury has applied that charge 15 times over in an 36-page indictment that was returned on Thursday.
The actor is facing a maximum sentence of 48 years behind bars and fines of up to $400,000.
According to Mail Online, counts one to seven apply to the comments he made to police officer Muhammed Baig, who first responded to his apartment when his friend called 911 on January 29.
The second set applies to Detective Kim Murray who interviewed him later that day. She is who Smollett told, according to the indictment, that one of his attackers was a 'white male'.
He told Baig that he had been attacked by two 'unknown males' who were dressed in black.
One was wearing a ski mask and they called him 'racial and homophobic slurs', he said.
Smollett told Baig they hit him 'about the face' with their hands and poured an 'unknown chemical substance' onto them.
Later, in his interview with Kim Murray that he 'fought back'. The indictment reads: 'Jussie Smollett reported that one of his attackers was a male white, in dark clothing.'
Tweet