Revealed : Why Zidane agreed to return to Real Madrid 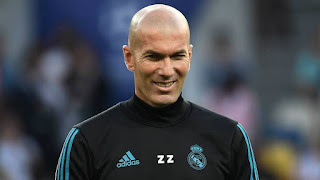 It didn't look likely, but the Frenchman was eventually convinced to return to his former post - and Goal outlines the reasons behind his decision.
Zinedine Zidane is back.
What seemed an impossibility not so long ago has come to fruition after the work president Florentino Perez put in to convince the French legend to return.
The relationship between the pair has always been special. They admire each other, with Real Madrid their shared passion, and it is that passion that sees the three-time Champions League-winning coach once again grace the dugout in Spain's capital after just eights months away.
“The team needed a change in order to keep winning,” Zizou himself said at his unveiling.
What seemed like the ideal option for the club has become a reality, but the great respect and relationship that Perez and Zidane have is not the only reason the latter was convinced to take the job once again.
The main condition on which Zidane's return hinged upon was power. Goal has learned that the iconic boss will have full power over the management of the first team – that is to say that he will have control over both arrivals and sales of personnel.
In modern football as a whole, never mind at the game's biggest superpower, handing that kind of responsibility to a coach is unprecedented.
Unprecedented, but necessary in this case. Part of the reason Zidane left in June was that he could only make minor tweaks to the squad rather than drastic changes. If Madrid want to win again, they need to make those changes and the right man to administer them.
To command a dressing room of huge egos a coach needs not only a voice, but a voice backed by the Bernabeu's board. Zidane has such backing this time around.
Tweet

There has been no response to "Revealed : Why Zidane agreed to return to Real Madrid"