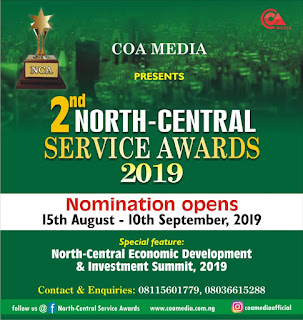 COA Media, organizer of The Plateau Awards, Plateau Leadership Summit and Face of Plateau has opened nomination for the 2nd Edition of the North-Central Service Award 2019.

The nomination will commence on 15th August and end 10th September, 2019.

Executive Director of COA Media, Amb. Cletus Akhimien said the event will bring together Entrepreneurs, Captains of Industries, Business Moguls and potential entrepreneurs together in order to discuss investment strategies and developmental plans for the Zone and Country at large.

He said date for the event will be made known to the public as preparations have reached advanced stage.

Amb. Cletus said those who have served and still serving the nation meticulously within the zone will be awarded to spur them to do better.

In May, 2019, COA Media held its 2nd Edition of Plateau Leadership Summit which was well attended.
Tweet

There has been no response to "COA Media Present 2nd Edition of the North-Central Service Award 2019."