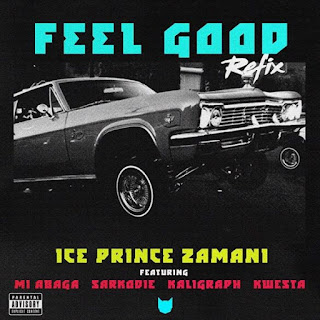 Super Cool Cats head-honcho, Ice Prince Zamani has released the remix to his previously heard single titled “Feel Good”, produced by Willis.
However, the song features his former label boss and one of the best rapper in Africa M.I Abaga, Ghanaian heavyweight rapper,Sarkodie, Talented Kenyan rapper, Khaligraph Jones, South African heavyweight rapper,Kwesta.
With this in mind, Ice Prince has hinted on his forthcoming project which will have songs like, ‘Hello Esther’ with DJ Tunez, ‘In A Fix’ with Mr Eazi.
AVAILABLE ON ITUNES.
Listen below and enjoy!