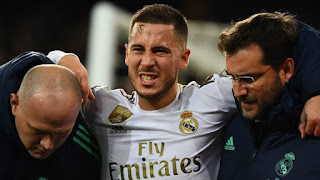 The Belgium international suffered a knock against PSG while on Champions League duty, with it confirmed that he is nursing a fracture
Eden Hazard is a serious doubt for Real Madrid’s Clasico clash with Barcelona on December 18, with the Blancos having revealed the full extent of the Belgian’s ankle injury.
The 28-year-old playmaker suffered a knock during a Champions Leagueclash with Paris Saint-Germain.
The Blancos suggested in the immediate aftermath of that European encounter that the injury was not as serious as first feared.n an initial medical update, the Liga giants suggested that Hazard had suffered little more than bruising.
They said in a statement: "After the tests carried out today on our player Eden Hazard by the Real Madrid medical services, he has been diagnosed with an external bruise on his right leg.
"His recovery will continue to be assessed."
Further tests have, however, unearthed more concerning damage to Hazard’s ankle.
He is in fact nursing a fracture, with it now likely that he will be forced onto the sidelines for the foreseeable future.
The latest report from Madrid on the club's official website read: "Following tests carried out on our player, Eden Hazard, by Real Madrid's medical department, the development of the perimalleolar bruising in his right leg has seen him diagnosed with an incomplete external microfracture in the aforementioned area.
“His recovery will continue to be assessed.”
Tweet